Simple explanation for our national debt... what they forget to tell us...

n 1981, the country had just elected Reagan to cure the "all-time-high, Trillion-Dollar debt." But compared with the size of the American economy, the debt was at its lowest point in fifty years. Reagan was duped by the "supply siders" and his greatest "disappointment" was adding $1.6 trillion to the $1T debt he said was catastrophic.


Now, here's the new slide show that explains what happened step by step. In case you have questions, it's documented here.

So, NOW you are mad? This is why I don't take you seriously...

So desperate, they don't even read their own reports

"For a single parent with two kids and an income of $20,000, that difference is even more pronounced. The jump is 8 percent (in after-tax income) under the Dem plan, and only 4.4 percent under the GOP one."


RNC Accidentally Highlights Study That Proves Dems' Tax Cut Plan Is More Generous
http://www.huffingtonpost.com/2010/10/08...
One of the promises made in the GOP's "Pledge to America" is that the party will make all legislation available for three days so that legislators can read it for clarity. One can hardly blame them for seeking to confront their own shortcomings! Perhaps they can take that promise further, and actually promise to read the studies that they circulate to the media, especially the ones that actually undermine their professed policies. This is just an idea I had!

See, yesterday morning, the Republican National Committee really wanted to stick it to Democratic legislators for that time they totally punted on holding a vote on the future of the Bush-era tax cuts. And so, they armed themselves with a shiny new study from the Tax Foundation that they thought really aided their criticism. "What excuse will the Democrats use now?"

Hey, who knows the answer to that question, right? Nevertheless, as Greg Sargent pointed out, the RNC really miscalculated:


As it happens, the study compared the actual Dem plan with the GOP one. And it found that for a family of four with an income of $40,000, the Dem plan -- continuing the low end tax cuts, plus the stimulus measures -- would cause a 7.8 percent jump in after-tax income. That jump would only be 6.8 percent under the GOP plan to continue all the Bush tax cuts.


For a single parent with two kids and an income of $20,000, that difference is even more pronounced. The jump is 8 percent under the Dem plan, and only 4.4 percent under the GOP one.
In fairness to the RNC, the study is good for the GOP in one sense. It confirms that the Bush tax cuts were helpful to the poor, despite popular belief that they only helped the rich. But the author of the study, Nick Kasprak, confirms that this finding isn't directly relevant to what Dems have proposed.
"Our study shows that the Bush tax cuts helped the poor a lot more than the popular perception, so the RNC is right to send it around for that reason," Kasprak tells me. "But the study also shows that the Congressional Democrats' plan is more generous to the poor, because it extends certain stimulus provisions into 2011, which the Republican plan does not. That isn't what the RNC wants to show."

Guess they really, really should have read that study, all the way to the end. But now you know whose tax cut plans are more generous to ordinary Americans.
Posted by Just Callin' It Like I See It at 10/18/2010 01:15:00 AM No comments:

"I'm a Democrat because I am Mormon"

This came up during another discussion... I remembered reading this article (or one very similar to it) long ago and was actually able to find it (or, again, something very much like it). I sincerely value my friendships with people of different faiths, but often worry that my political views will cause division with those who lean GOP. I hope that after reading this, my friends will see how we have much in common after all...

I'm a Democrat because I am Mormon

To many, it sounds like a contradiction in terms: a Mormon Democrat. People regularly ask me how I reconcile my religious beliefs with my political opinions, shocked that a good Mormon girl would throw her support behind such a scandalous party. Believe it or not, being a member of The Church of Jesus Christ of Latter day Saints doesn't automatically make one an ardent member of the GOP, even in Utah. In fact, it's my religious beliefs about compassion and generosity that have made me liberal.

The LDS Church's official position has long been one of political neutrality, endorsing neither major political party. When the church takes one of its rare official political stances, it is always on a particular issue and should not be misconstrued as support of one party or one political ideology. Mormon leaders constantly encourage all followers, regardless of party, to become involved in politics, vote and run for office when possible. Yet many believe that to be LDS, you have to be Republican. It's just not true-if anything, the Democratic Party more closely adheres to basic Christian values.

Obviously, individual Mormons hold different views about the same beliefs, just as members of the Democratic Party take a wide variety of positions. But many elements of liberal politics are principles central to the gospel of The Church of Jesus Christ of Latter-day Saints: social welfare, the environment, the role of government, the balance between business and the community. I'm not a Democrat in spite of my religion-I'm a Democrat because of my religion.

A core principle of most religions is a basic sense of compassion for the poor. In fact, most religions view poverty as a symbol of humility and strength, while wealth is seen as a moral failing vice that brings pride and unrighteousness. Yet many on the far right treat the poor as lazy, regarding wealth as a sign of character. Mormons are counseled to work toward a society in which "there are no poor among us." Democrats make social assistance a priority in a way that other parties do not. In many ways, liberals see the government as a useful tool that, when used correctly, can improve life for everyone.

One reason many people assume Mormons must be conservative may be so-called moral issues, like abortion or same-sex marriage. But Joseph Smith taught that matters of conscience should not be regulated but instead, taught through principle by example, letting others choose whether to follow. To me, such issues become peripheral when I examine basic ideological differences about the role of government-to create opportunity and help everyone succeed.

The LDS religion teaches of a basic human responsibility to help and lift others in righteousness and knowledge. It, therefore, makes sense to support a political party that makes social programs a priority. A government that fails to provide for its weakest members is not only destined for failure-it's morally depraved.

Conservatives often maintain that anyone willing to work hard should be able to earn a decent living. But economically, the playing field has never been level. In fact, Mormon scripture emphasizes that worldly goods are gifts from God because of his generosity, not our entitlement. Consequently, my religious views teach me that I have an inherent duty to give to people around me-everything I have is not mine at all, but a gift given to share.

The United States can have a healthy economy without deserting the less fortunate, such as the sick, the poor, the elderly and the homeless. Perpetual handouts are not the answer, but there are countless underprivileged Americans who need help with everything from job training to child care to adequate health-care coverage.

Many conservatives claim social programs are inefficient, and they are right to want to curb waste. Waste can be reduced without deserting social responsibility. It's important to remember the point: we're here to help each other. One of Christ's most basic messages was about giving without thought of reward. It follows that many Christians would feel a sense of social responsibility to give for the collective good.

The most basic of religious principles is that individuals have a responsibility to take care of themselves and a responsibility to help others. Many conservatives have bizarrely distorted self reliance into selfishness, maintaining that you are only responsible for yourself. As a Mormon, it's frightening to see selfishness treated as a virtue-I believe we can take care of ourselves without abandoning those around us.

Republicans are often anti government and pro-business, which makes sense in moderation. Obviously, excessive government power must be curbed and reasonable economic growth should be encouraged. But the LDS Church has a long tradition of strength in community-Mormons know the power that comes when a committed group of people works together to lift the less fortunate. To view money or economic development as the ultimate aim of every political undertaking is grossly misguided-the mission of life and of government is much larger than that. Religion involves a basic sense of decency and social liberals adhering to the belief that it's more important to lend a helping hand than to be rich.

Another basic LDS belief is that as humans, we are stewards over the earth with a responsibility to guard and tend. From a religious perspective, it follows that we should do what we can to preserve the earth instead of exploit it. Typically, Republicans are against environmental regulations because they worry laws could hinder industry. But if I believe the earth is a sacred creation that I'm responsible to look after, it makes sense that preserving its glory would be a higher priority than shortsighted economic development.

Economically, liberals have a more balanced plan for the country than the conservative free-market-fixes-all approach. In his book, Approaching Zion, Hugh Nibley discusses how many Republicans view an ideal economy as purely capitalist, a survival of the fittest in which anything goes. In such a system, the weak, the frail, the sick and the poor will rightfully die off because they will not have the strength to flourish-a remarkable contrast to the parable of Christ seeking after one lost sheep.

Obviously, all views of Mormonism don't match up with all views of the Democratic Party. In fact, I commend the LDS Church's neutral stance that individuals should study the issues, make their own political decisions and act accordingly. Neither party will complement any church on every issue. Yet I see many liberal views directly in line with LDS principles.

I'm a Democrat because I'm a Mormon and I believe in loving our neighbors and in helping the less fortunate. I believe in a wise, balanced stewardship of the earth and that I have a responsibility to share what I have with others. I believe government can be a powerful tool for good and we can be self reliant without being selfish. To be liberal and Mormon is not only possible,it's practical, it's compassionate and it's principled.

If Jesus was Republican... 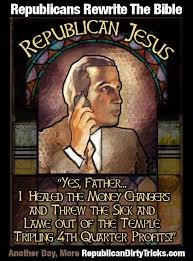 Email ThisBlogThis!Share to TwitterShare to FacebookShare to Pinterest
Newer Posts Older Posts Home
Subscribe to: Posts (Atom)
"Other than telling us how to live, think, marry, pray, vote, invest, educate our children and, now, die, I think the Republicans have done a fine job of getting government out of our personal lives."